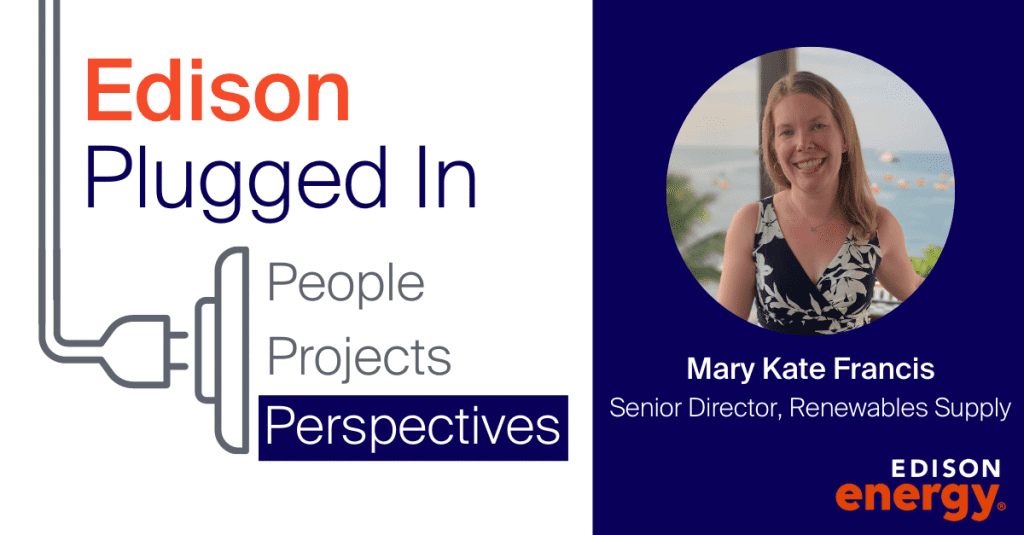 In the next installment of our Edison Plugged In Series, which shines a spotlight on the people, projects, and perspectives of the Edison Energy team, we are featuring the insights of Mary Kate Francis on current solar supply chain constraints. Mary Kate is Edison Energy’s Senior Director of Renewables Supply and oversees the renewable energy supply team for our Renewables Advisory practice. Find out more about the factors leading to supply chain challenges in the solar industry and how to navigate them below.

The U.S. solar industry reached a critical milestone this year, surpassing 100 GW of installed electric generating capacity. But despite significant growth across the solar sector, attention is now turning to supply chain constraints, which have risen sharply since the second half of 2020.

The number of U.S. renewable energy projects that can realistically come online by the end of 2023 is currently dwindling, according to Edison Energy’s Q2 2021 Renewables Market Update. Significant demand for renewable power from a host of buyers has led to many projects being contracted and moved off market. Other projects are seeing their online dates pushed into 2024.

PPA prices for new renewable projects in the U.S. have been trending upward over the last two years, with many developers citing huge shifts in macroeconomic factors as the driving force behind the increases. Some of that price pressure is coming from commodities markets, where the price of steel and aluminum have ticked up significantly over the past year, according to Mary Kate Francis, Senior Director of Renewables Supply at Edison Energy.

“Solar panels really stand out because we’ve been seeing cost declines for so long, and a lot of developers have been anticipating that the technology will get better and better and the cost will go down over time,” Francis said. “But we’re actually seeing this huge crunch in availability of solar modules. I think part of it is demand, but part of it is also supply chain-related constraints on inputs to solar modules, which are seeing price increases.”

As an example, the cost of steel, which is used in solar racking systems, is up more than three-fold since last year. Solar modules are another pain point, where shortages in inputs like polysilicon are driving prices up, according to Wood Mackenzie.

Other areas of the economy are also experiencing a supply-side squeeze, including the shipping and logistics sector, which continues to be in high demand, according to the Solar Energy Industries Association (SEIA). The trade group says that virtually every part of the shipping and logistics sector has been impacted, from the availability of shipping containers to the workers needed to fill the containers and drive the trucks. This has led to delivery delays for solar products.

In addition, solar panel manufacturers are under significant scrutiny around the use of forced labor within the supply chain, according to Francis.

The Biden administration recently issued an import ban on equipment from Chinese solar companies based on allegations of forced labor in the Xinjiang region of China, where approximately 50 percent of the global supply of polysilicon – a critical component of solar modules – is produced. Since 2018, the polysilicon industry in Xinjiang has quadrupled, according to the U.S. Dept. of Labor.

“I think this has caused basically every developer to reevaluate how they are sourcing their panels and which supplier they are trusting,” Francis said. “We’re early on in this problem, so there’s not yet a straightforward metric like an international seal of approval to guide your decision. You need to get information from the solar manufacturer, and you have to trust the information that they’re sharing with you. Some developers have chosen to change to a manufacturer that they trust more.”

Earlier this year, nearly 200 solar companies signed a pledge opposing forced labor in the solar supply chain. The pledge is part of an industry-wide effort, led by SEIA, which supports the development of a supply chain traceability protocol and a comprehensive update to SEIA’s Solar Commitment, which defines common practices and expectations for the solar industry.

“With many developers now sourcing from vendors who can provide the most transparency around their supply chains, we are seeing higher demands on select solar manufacturers, as well as increased prices for panels that were already in short supply,” Francis said.

This has added to the growing list of challenges that are now impacting the bottom line for both solar developers and installers.

While the deadline for the full value of the solar investment tax credit (ITC) was recently extended two years to 2025 for projects that started construction by the end of 2019, Francis says there are still a significant number of projects slated to come online in 2023.

“We have a rush towards a record year for solar,” she said. “From what I’ve seen in the market, there are tons of projects that are contracted with online dates for 2023. Some developers may have put an anticipated online date for the end of 2023 and a guaranteed online date for the end of 2024. Now that the deadline for the ITC has shifted out two years, maybe those projects would actually be in a position to take advantage of that shift. Maybe they wait on their panel supply and they look to construct the project in 2024.”

But it’s all about location, location, location. In PJM and MISO territories, slow interconnection timelines and protracted permitting processes have left just a small inventory of 2023 projects on the market. Conversely, SPP and ERCOT are a better bet for earlier online dates, with fewer hurdles in getting projects up and running by 2023. That said, challenges continue to exist in ERCOT around interconnection, congestion, and mineral rights.

“One thing we found is that we need to be very clear with clients up front that there are a lot of buyers in the market right now–there’s a lot of competition for these projects,” Francis said. “There’s a lot of pricing pressure in the market and a lot of assumptions that are shifting when it comes to the offers that developers are putting forward. So when it comes to focusing on projects that you are most interested in, the first thing that is really critical is to conduct very detailed due diligence on the projects.”

This means taking a hard look at all development milestones, as well as every aspect of a project that has been sensitive to supply chain and timing constraints, says Francis.

“We arm our clients with as much information as possible,” Francis said. “We guide them to ask the developers a lot of questions about where the projects stand on each of these components and to recognize that for all of the things that are still pending, there’s a real risk of things changing. The further advanced in development a project is, the more likely it is that it will be successful. We help our clients gain a solid understanding of the commercial terms we’re working with and support them in negotiating the appropriate allocation of risks between buyer and seller. Buyers need to understand that if there is a significant outstanding development risk, it could keep the project from coming to fruition. Knowing that ahead of time so they don’t get caught off guard is really critical.”

Flexibility could also prove to be a gamechanger.

“Buyers may want to identify three possible projects at the outset of the process rather than only one project that can meet their needs because something could shift along the way,” Francis said. “You do due diligence as much as you can and find the project that is the right fit for you. But if for some reason things take a turn for the worse, you need to be flexible to potentially shift to another project if the one you originally had at the top of your list doesn’t pan out.”

Francis anticipates that demand for renewables will continue to grow but is hopeful that supply chain constraints will ease over time. She also cites ongoing efforts across the solar industry to address forced labor globally.

“I know that there are a lot of efforts going on,” she said. “SEIA is convening groups with developers and manufacturers to create metrics and ways to be sure about avoiding forced labor in the supply chain. I look forward to more developments on that front so that you can have a wider variety of suppliers that can all achieve this certification for transparency and buyers can be proud to use their product. I think that will really be helpful to allow for more competition in the market.” 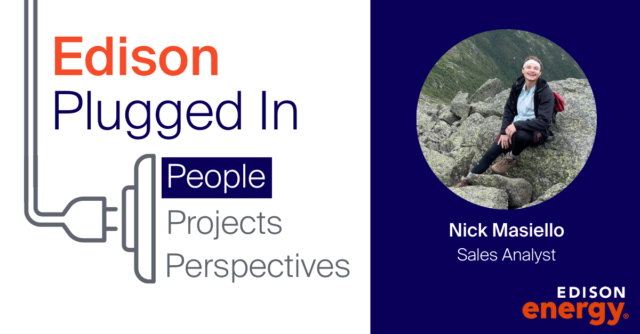 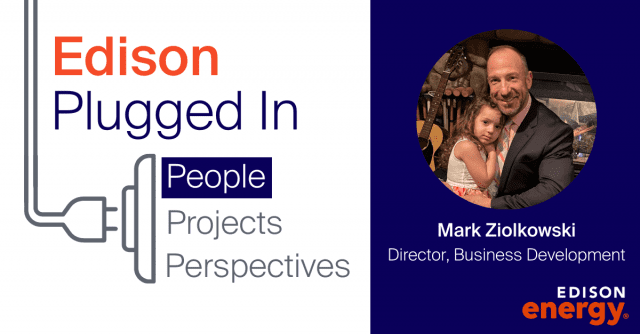 A passion for people, the planet, and his daughter drives this Jersey guy to champion cleaner, greener energy 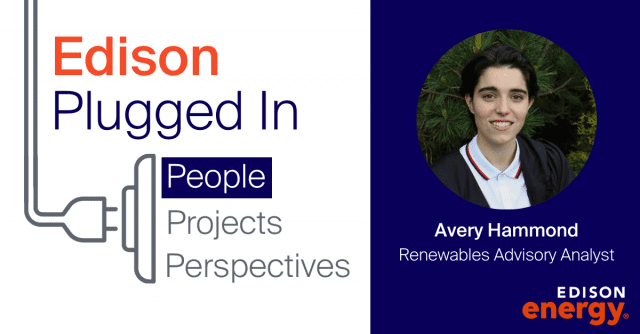