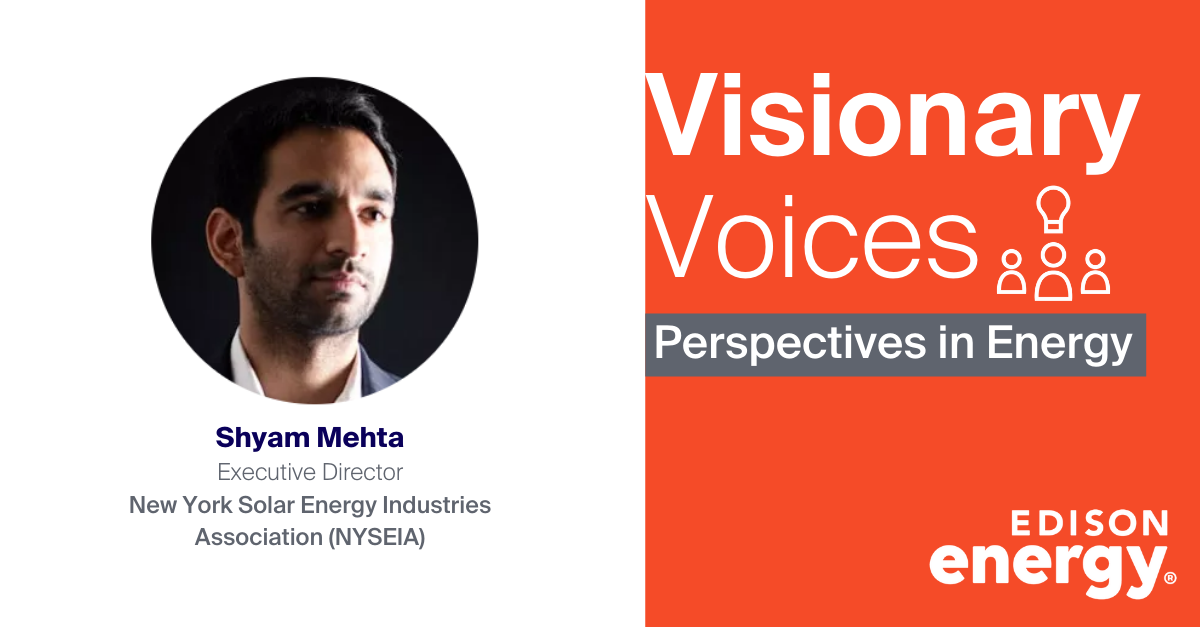 Shyam Mehta joined NYSEIA after almost a decade as a market research manager and analyst at Greentech Media (GTM), an integrated research, media, and events firm covering the global renewable energy industry that was acquired by Wood Mackenzie in 2016. As an industry expert covering global solar markets, he led and managed GTM’s efforts in tracking, forecasting and analyzing solar PV and battery storage industry trends and metrics, regulatory developments, policy incentives and technologies across a range of products and services to a client base including GE, Con Edison, NYSERDA and NREL.

In this first of a two-part series, Edison Energy sat down with Shyam Mehta, Executive Director of the New York Solar Energy Industries Association (NYSEIA), who calls 2021 a “transitional” year for the state’s community solar market.

Last year, New York State saw a record year for newly installed solar capacity, making it the largest community solar market in the country in 2020. As of December, 371 community solar projects were operational in the state, comprising 497 MW of capacity. Roughly 63 percent of this capacity was part of the community solar program.

At the national level, New York was the largest state community solar market in terms of 2020 installations and second in cumulative deployments.

But that was then, and this is now. With a slew of solar incentives running out of funding in 2021, many are questioning how the state can hit its mandated target of 6 GW of distributed solar by 2025.

For projects in Upstate New York, the two primary solar incentives– the Community Adder for community solar projects and the NY Sun Block incentive for C&I projects–both ran out of funds in Q1 and Q2 of this year.

Downstate, in Con Edison territory, the Community Credit is on the cusp of running out, with just over 20 MW left in incentives as of September.

“The state only authorized a certain amount of money for community solar incentives and that has been exhausted,” said Shyam Mehta, Executive Director of the New York Solar Energy Industries Association (NYSEIA). “That basically plunged the market into pretty significant uncertainty in terms of the future of new community solar development in New York.”

But with a significant legacy pipeline of projects in development that will still be built, this uncertainty will not be reflected in the installation numbers for at least the next year.

“You will still see a very healthy community solar market reflected in 2021 installation numbers,” Mehta said. “But there’s a significant lag of more than a year between a project being developed and it actually being installed. New projects don’t have those incentives. In some ways you could say that this is the cost of success. The state ran through the incentive support much faster than anticipated.”

While the Climate Leadership and Community Protection Act (CLCPA) lays out specific targets to get New York to 70 percent renewable energy by 2030 and 100 percent zero-emission electricity by 2040, the state’s plan for distributed solar remains unclear.

The state is currently pushing for a new, administratively-set distributed solar goal for 2030, a plan that NYSEIA is actively supporting.

“We’ve recommended previously that an appropriate goal for 2030 is on the order of 12 GW,” Mehta said. “That would mean another 6 GW needing to be installed between 2026 and 2030, so about 1 GW a year, which is ambitious but achievable. We think distributed solar would have an overall penetration rate of roughly 10 percent of New York State’s load.”

The New York State Energy Research and Development Authority (NYSERDA) plans on releasing a white paper within the next two months, which will include a recommendation for the state’s Public Service Commission (PSC) to rule on the type of incentive or compensatory support community solar and large-scale solar should receive to hit the 2030 goal.

“What we’ve been repeatedly recommending as the primary lever to actually get that support that is needed is an administratively-set increase in the environmental value, or e-value component of this value stack compensation for distributed resources in New York,” Mehta said.

In 2017, the PSC approved the Value of Distributed Energy Resources, or VDER, with the goal of more accurately compensating renewable energy generation for its benefits to the environment and electric grid.

Last year, the CLCPA directed the state’s Department of Environmental Conservation (DEC) to perform an updated calculation of the social cost of carbon, also directing other state agencies to incorporate DEC’s calculation in their rulemaking.

The Value of Carbon guidance, developed by DEC in consultation with NYSERDA, establishes a monetary value for the avoided emissions of carbon dioxide, methane, and nitrous oxide. The metric is broadly applicable to all state agencies and authorities to demonstrate the societal value of actions to reduce greenhouse gas (GHG) emissions.

“The DEC implies a much higher social cost of carbon value than what the Department of Public Service (DPS) is using,” Mehta said. “That seems to be to the industry and energy and environmental advocates in New York the most justifiable, elegant and appropriate way to provide the needed market support. That’s what we’ve been recommending for quite some time, and that’s what the state is looking at.”

Beyond an e-value, the state is also considering an annual competitive solicitation to help scale community solar, looking to the market to determine community solar incentivization.

“You can see why they like this idea because it’s a constant treadmill–and a painful treadmill at that–to continually keep adjusting incentives to compensate for the missing money,” Mehta said. “The auction has the benefit of putting the onus onto the market. The problem with that is the competitive solicitation model has a lot of complexities associated with it, particularly for an annual solicitation that involves hundreds of projects. The large-scale solicitation process happens every three to four years and you get dozens of bids instead of hundreds of bids. The industry has been unequivocally supporting the administratively-set e-value improvement option over the auction option.”

The industry has expressed concern that bad faith actors will drive prices down by offering unrealistically low bids, resulting in hundreds of projects that will never be developed. The other issue is the time and effort developers and financiers have spent on refining the VDER compensation mechanism over the last five years.

“Abandoning the VDER framework for an auction concept definitely raises concerns in terms of the financeability of projects, market consolidation, the complexity of administering an annual auction, and project attrition stemming from unrealistically low bids,” Mehta said.

The DPS is expected to file its recommendations next month.

“There’s definitely a lot of eyeballs on this proceeding and a lot of concern, because until the dust settles here and we get a Commission ruling, we won’t know what the future of community solar is from a development perspective in New York State,” Mehta said. “There’s obviously a lot of interest because there’s been significant progress in the last five years to scale the market.”

In the meantime, there may be some shorter-term relief. Earlier this year, NYSEIA filed a joint petition with several other solar associations asking the PSC to expand the availability of Con Edison’s Community Credit by at least 180 MW for distributed generated projects.

Since 2019, availability of the Community Credit has coincided with the growing community solar industry in Con Edison’s service territory, with approximately 89 MW of solar capacity entering the pipeline of projects proposed for interconnection in 2020. The incentive inadvertently resulted in an influx of natural gas-fired fuel cells in the same service territory, known as the Fuel Cell Loophole.

Before the PSC was able to close this loophole, a small number of fuel cells reserved over half of the Community Credit capacity.

“That sucked out a bunch of capacity and funding that otherwise would have been still available for community solar,” Mehta said. “We’re asking for those lost megawatts back to keep New York’s community solar market going. That’s something that’s in play. My sense is we may get some short-term replenishment next month through a Commission order.”

Click here to explore more from our Visionary Voices: Perspectives in Energy Series and stay tuned for the second part of our conversation with Shyam Mehta. 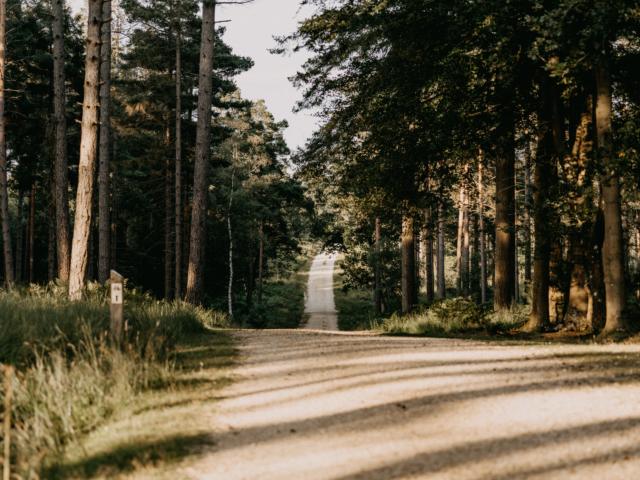 Cutting costs while reducing carbon? Global industrial leader ITW is getting it done 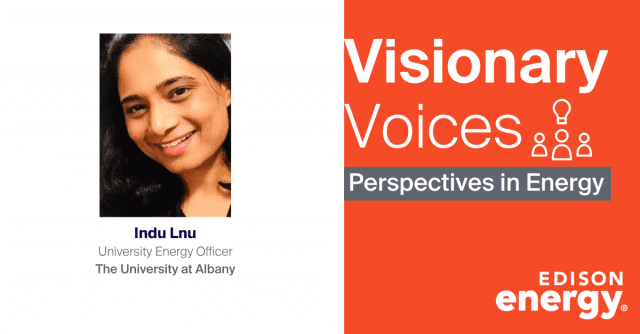