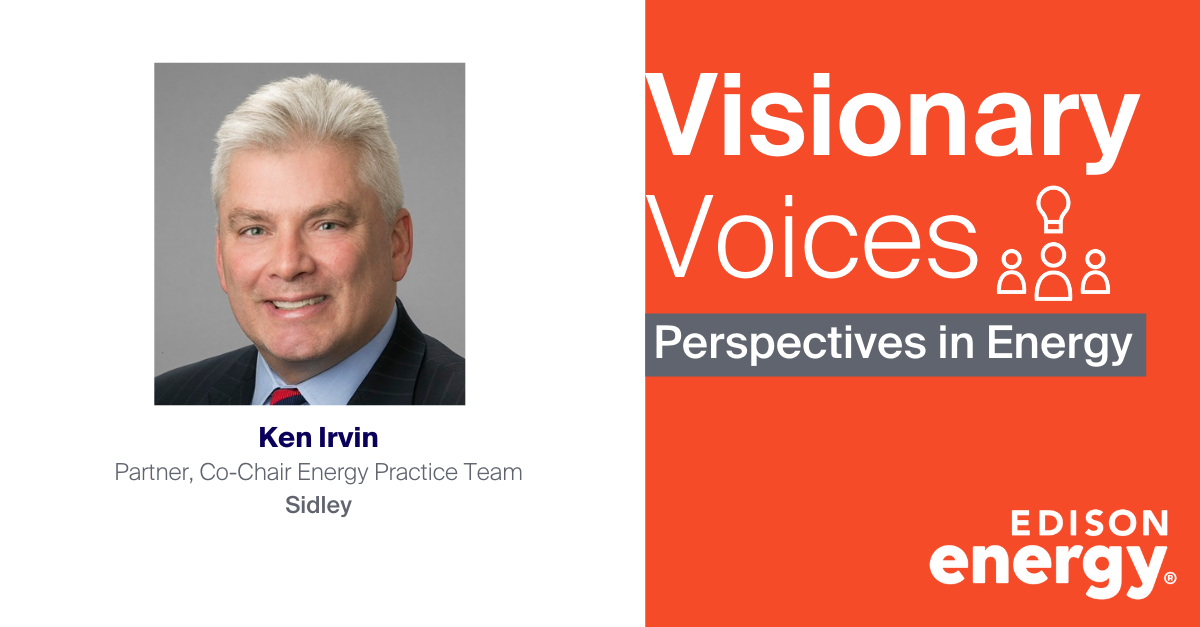 In this first of a two-part series, Edison sat down with Ken Irvin, co-leader of Sidley’s global Energy practice area team to discuss key highlights of the recently passed Infrastructure bill. Irvin represents clients on a variety of regulatory, enforcement, compliance, and transactional matters involving the U.S. wholesale electricity and natural gas markets, as well as with the energy transition. He has extensive experience representing clients in regulatory and investigations proceedings before the Federal Energy Regulatory Commission (FERC) and multiple state energy regulatory agencies.

Frequently recognized as one of the leading lawyers in his field, Irvin has been included since 2012 in Chambers USA and recognized by The Legal 500 U.S. for his Energy Regulatory practice. He was recently selected by The National Law Journal for inclusion in the annual list of Energy & Environmental Trailblazers. The recognition honors individuals who have “moved the needle” and made an impact at the “crucial intersection of energy production and the environment.”

In early November, Congress passed the bipartisan Infrastructure Investment and Jobs Act to rebuild America’s roads, bridges, and rails, expand access to clean drinking water, and ensure that every American has access to high-speed internet.

The bill also tackles the climate crisis in a big way, with more than $65 billion going towards updating the nation’s power infrastructure and to support the development, demonstration, and deployment of clean energy technologies, and an investment of over $50 billion to protect against droughts, heat, floods, and wildfires.

The legislation is the largest investment in the resilience of physical and natural systems in American history. Combined with the Biden administration’s Build Back Better Framework, the legislation is expected to add approximately 1.5 million jobs per year over the next decade.

“The amount of investment, stimulus, and economic growth that should come from this will be phenomenal, so I’m very bullish on it,” said Ken Irvin, co-leader of Sidley’s global Energy practice area team. “The proof is the bipartisan support. A significant number of Republicans voted for this in both chambers, so it does indicate that it’s got a nonpartisan merit to it all. That’s a large part of my optimism here.”

“It’s clear that we need to bring those manufacturing capabilities home to our own market and basically set up not just battery manufacturing but the whole supply chain, the whole cradle-to-grave life cycle,” Irvin said. “For batteries, panels and everything associated with renewable energy, there’s going to have to be a lot of reshoring because of the geopolitical overhang on trade. It’s also cybersecurity. And if we do it all here in the U.S., hopefully that means better security. The parts of this bill that seek to provide seed capital, economic stimulus for reinvigorating that kind of manufacturing, and that kind of workforce here in the U.S. is going to be important towards our decarbonization efforts.”

The bill also requires the Secretary of Energy to conduct a study of types and commercial applications of codes and standards applied to stationary, mobile, and cross-moving energy storage systems, such as EV batteries.

“Efforts to get codes and standards written so everybody speaks the same language and uses the same measures is going to be critically important,” Irvin said. “It will help to ensure that the people who are consuming storage services and goods know that they’re buying the right thing and they can compare apples to apples and oranges to oranges. You’d be amazed at how important industry standards are to the advancement of technology. Those aspects–although they sound mundane and bureaucratic–are going to be important.”

A competitive pilot program laid out in the Energy Act of 2020 is built upon within the Infrastructure bill, with a mandate to demonstrate second-life applications of EV batteries as aggregated energy storage installations to provide services to the electric grid like V2G technology.

“I like V2G technology for the ability to find additional economics other than just moving from Point A to Point B,” Irvin said. “It adds to grid enhancement and reliability, it deals with intermittency, and it can be a means to deal with interruptions in a distribution network. There’s nobody better to invest in hypothetical ideas than the federal government. We have seen time and again that that’s a very effective way to get projects capitalized and in service and we look forward to that.”

Irvin referenced Ford’s F1-50 Lightning, which includes a feature that enables the pickup truck to act as a reserve of energy storage for homes during outages. The truck can power an entire house for three days on a single charge and can stretch to 10 days if energy use is rationed.

“That’s what V2G technology is doing,” he said. “And as big as the battery is in the F1-50 Lightning, it’s much bigger in a bus or delivery van or larger vehicles, so all of that is a positive. Decarbonization of transportation by 2035 or 2050–these are ambitious goals. That’s not that long in the future. Will we get there? I don’t know. Is it good to reach for the moon ambitions like that? I think it is. I think that’s what’s happening in the nation’s capital–that’s what they should be doing.” 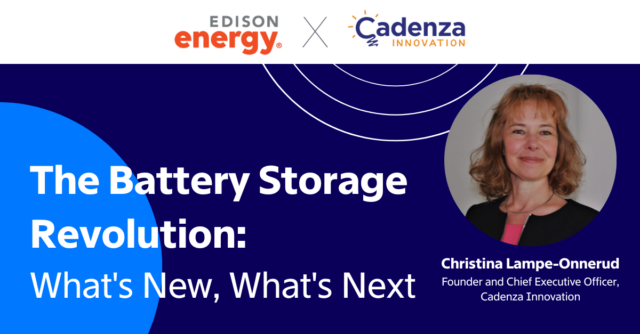 Growth of U.S. energy storage will hinge on innovation, engagement, and a robust domestic supply chain: “We could be a battery nation”