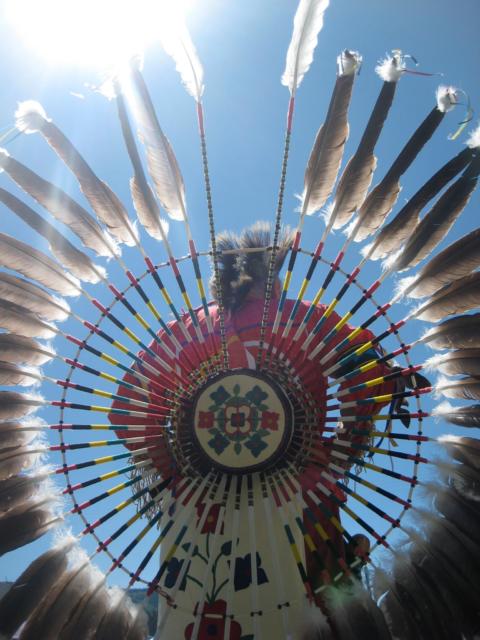 A bustle crafted by Goldwyn’s mother, made from an eagle that died on the Flathead Reservation

Since it was instituted in Berkeley, CA, in 1991, Indigenous Peoples’ Day has been celebrated by a growing number of cities, states, and universities to honor the history, culture, and contributions of Indigenous communities. This includes Native Americans, Alaska Natives, Native Hawaiians, Samoans, and Chamorros. The holiday started as a counter-celebration to Columbus Day, offering an opportunity to shift from a celebration of colonialism to honoring the true history of the genocide and oppression suffered by Indigenous peoples at the hands of the colonists. It also serves to highlight current injustices against Native communities, offering an opportunity to address these injustices through increased awareness, education, and action.

Beginning in 1492, the colonization of the Americas resulted in a steep decline of the Native American population. This decline continued long after the country’s formation, with the U.S. waging massacres against Native Americans, removing them from their ancestral lands, and subjecting them to unjust treaties and discriminatory federal and state policies. Beginning in the 1960s, Indigenous social justice groups started to raise awareness around these discriminatory policies, working to bring sovereignty and self-determination to Native nations.

Keri Goldwyn, a Project Engineer on Edison Energy’s Transportation Electrification team, spent much of her childhood on Montana’s Flathead Reservation, where many of her family members still live. Her mother’s parents are Native American–her grandfather was a member of the Confederated Tribe of the Salish & Kootenai Tribe in western Montana, while her grandmother hailed from the Fort Peck Assiniboine Reservation in the northeast part of the state. Goldwyn’s family has always been active within the Tribal community–her grandfather was a Tribal judge, while her uncle served as a Tribal councilman.

Montana’s Flathead Reservation is home to three Tribes–the Bitterroot Salish, Upper Pend d’Oreille, and the Kootenai, three of 574 federally recognized Tribes in the U.S. The territories of these three Tribes once covered all of western Montana and extended into parts of Idaho, British Columbia, and Wyoming. The Flathead Reservation was established via the Hellgate Treaty in 1855, but over half a million acres passed out of Tribal ownership during land allotment that began in 1904.

Goldwyn, who is an enrolled member of the Confederated Salish & Kootenai, says that spending time with her grandparents and extended family on the reservation had a significant impact on her life. 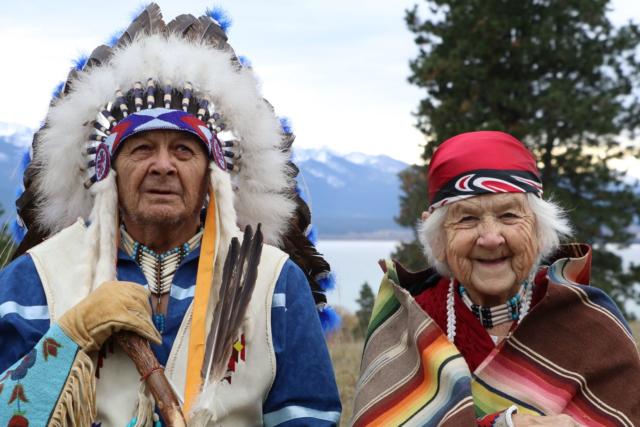 Goldwyn’s grandparents on the Flathead Reservation

“I did not grow up on the reservation, but it’s always felt like home,” she said. “The culture and community are kind of like you are all family. It’s very community-based; we’re close with everybody. Families are very important. A respect and shared responsibility to care for the land was really important in my upbringing as well. In my adult life, that respect for nature and sustainability led me to choose this field, so I’m pretty passionate about conservation.”

“Over time, I said, ‘I need to be doing something more, something I can really feel passionate about,’” she said. “I think my upbringing steered me that way. What I do is based on my passion for conservation, sustainability, and to do right by the next generation. A lot of people can look towards Native cultures for help towards fighting climate change. I think Native voices are very strong in this fight we have today, so hearing those voices and involving Native cultures is important.”

Over the years, Indigenous peoples and their allies have been working to achieve social justice and establish policies to return essential rights and services to Native American Tribes. Projects like Reclaiming Native Truth, a national effort to foster cultural, social and policy change, seeks to address discrimination and pervasive false narratives that continue to limit Native opportunity, including access to justice and health care.

“I think for many people, Indigenous peoples’ history begins in 1492 when Columbus landed,” Goldwyn said. “It’s the Colonial narrative and that’s basically what’s been pushed. In fact, Natives have been around for thousands of years and they have this great knowledge of their culture and the continent. There’s so much more history that isn’t told. Most of our Native history is told by non-Native voices, and they are amplified in our textbooks, in our literature, in movies and television, in the news.”

That narrative has cultivated depictions of negative stereotypes, which have portrayed Native Americans as savages, or has served to romanticize that population, implying that all Native populations are alike, says Goldwyn.

“The narrative is still being told by non-Native voices,” she said. “In fact, there’s this great history of Native Americans–it’s one of strength and resilience and survival. They suffered great trauma and injustice and still their culture is surviving. They’re working on revitalizing that culture. Amplifying Native voices and listening to the true history is something society really needs to work on.” 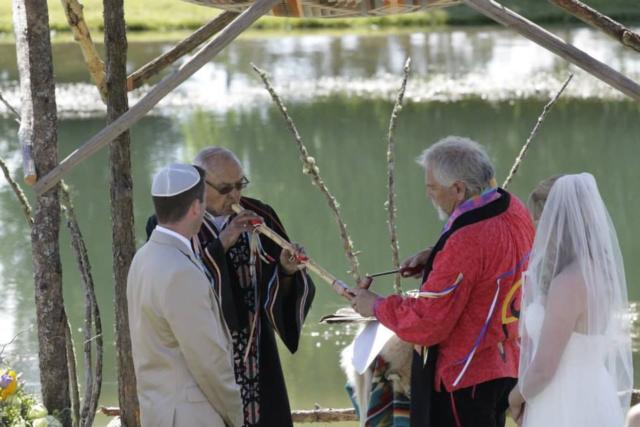 Goldwyn’s grandfather and uncle lighting the peace pipe at her wedding, held on the Flathead Reservation

Critical to the Native story is the long history of promises breached by the U.S. government. During the 18th and 19th centuries, Native American Tribes signed much of their land away via “treaties” with federal and state officials. These treaties, which were signed under threat of genocide, were supposed to ensure that Native Tribes could continue to hunt and fish on the lands they were forced to relinquish. They also promised cash payments, mineral rights, and access to health care and education.

But most of these treaties have been broken or ignored, with game wardens arresting Tribal members attempting to exercise their rights to hunt and fish on the lands they once owned. In addition, governments and private interest groups have developed on these lands and polluted and blocked waterways, resulting in the destruction of precious natural resources.

“We have hundreds of treaties and laws with the U.S. and a lot of them are still not being honored,” Goldwyn said. “I think honoring water and land rights, hunting and fishing rights, and access to sacred land is a problem. Acknowledging that these places are sacred to different Tribes and then giving them access to that land needs to happen. It is only fair to honor these treaties with Native nations and to respect their sovereignty.”

As a way to honor and celebrate Indigenous Peoples’ Day, Goldwyn believes society should rethink the historical narrative, do some research, and learn about Native American culture. This can serve as a path forward and an opportunity to effect change and growth.

“I think the first thing people can do is just challenge the narrative that they’ve been given, to really think about it,” she said. “Are you biased because of where you heard the narrative? Have you looked towards Native literature and movies, Native historians? Look towards Native sources of history and realize that every Tribe is different. I bet everyone lives pretty close to a Tribe. My Tribe has a People Center that has a museum that you can visit. There are definitely resources. You can respectfully attend pow wows to witness the beautiful celebration of native culture and ceremony. It’s a great way to educate yourself on Native culture firsthand.”