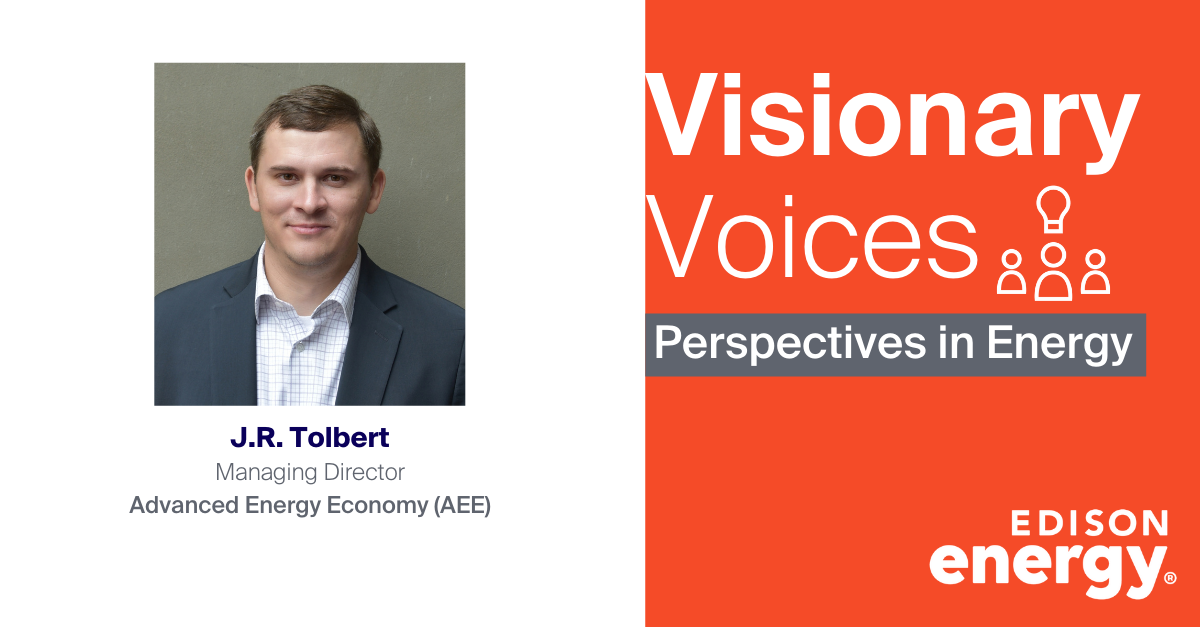 Edison Energy recently sat down with J.R. Tolbert, Managing Director at Advanced Energy Economy (AEE), to discuss the organization’s efforts in accelerating and expanding policies that support the nation’s transition to a clean energy economy. In his role, Tolbert focuses on political strategy, coalition building, and fundraising necessary to create, support, and execute successful policy campaigns. Before joining AEE, Tolbert served as the Executive Director of the National Caucus of Environmental Legislators (NCEL).

Advanced Energy Economy (AEE) is a national association of businesses that works to accelerate the move to 100 percent clean energy and electrified transportation across the U.S.

The trade group, whose membership encompasses a broad range of products and services including energy efficiency, demand response, solar, nuclear, and electric vehicles, among others, represents more than 100 companies in the nation’s $238 billion advanced energy industry, including Edison Energy.

With a mission to enable rapid growth of advanced energy businesses, AEE advocates for public policies in more than a dozen states, across wholesale electricity markets, and at the federal level.

“Our focus organizationally is on driving towards a 100 percent clean energy, advanced energy economy by mid-century,” Tolbert said. “For us, that is defined as a carbon-free economy. We view our role as creating the markets that are needed for our technologies that are within our membership and our taxonomy to get there to achieve that bigger goal. So, the role of policy is to create a market, and the role of the companies is to demonstrate that their business model works in that market.”

Over the past several years, AEE has leaned into the “big fights” that can move the needle for the market in a big way. The trade group helped draft Virginia’s Clean Economy Act, making Virginia the first southern state to adopt 100 percent clean energy. AEE was also deep in the weeds on Nevada’s successful effort to set the state’s Renewable Portfolio Standard to 50 percent, as well as codify the state’s goal of 100 percent clean energy.

“We’ve been deeply engaged in states like California, but at the same time we’re also focused on making sure that we don’t leave other states that need to transition,” Tolbert said. “Our team is deeply engaged not just in blue or purple states, but also in states that are red because we can’t achieve our organizational goals of a 100 percent clean economy by leaving states like Indiana, Texas, or Florida behind. In each of those places, we can point to more incremental progress that we view as building toward an opportunity to have more of a watershed moment in those states. The thing that is unique about AEE is that when we approach the work, we are trying to create markets for all of the technologies that fall within the clean energy industry.”

The group advocates for industry opportunities both on the generation side and the demand side, which helps to reduce costs and provide longer-term political viability.

“Consumers are able to see, touch, feel clean energy and the benefits that it provides to their own pocketbooks,” Tolbert said. “At the same time, we understand the scale of the issue that we’re trying to tackle and the speed with which we’re trying to do it. We’re looking at policies that lift all votes in statehouses across the country and at the federal level.”

In states fighting the development of clean energy projects, AEE leans into the fact that the companies building these projects are paying taxes to host counties and communities, providing a steady stream of revenue into municipalities.

Florida serves as a good example of red states going green. The state has the second largest number of EVs on the road in the nation–something of an accomplishment when considering states with longstanding clean car policies.

“One piece of it is that Florida has said, ‘Why would we put a barrier in the way for people to be able to sell in our state?’” Tolbert said. “So, Florida was an early adopter of direct sales, with a growing list of new companies coming to the state.”

The recently passed Infrastructure and Investment Jobs Act (IIJA) has helped build momentum around the clean energy transition, providing $550 billion in new spending for the nation’s infrastructure over the next five years.

“We think of the infrastructure package as a down payment to what the federal government and congress should be doing on these issues,” Tolbert said. “We realized early on that transitioning of the PTC and ITC from a tax structure to a direct payment structure was one place that could pump money directly into the economy, directly into the companies when their capital had been crunched due to the Covid pandemic.”

The direct pay proposal in the Build Back Better Act would allow renewable energy developers to use an ITC (investment tax credit) or PTC (production tax credit) as a refundable credit. This would enable a developer to treat the amount of credit as an overpayment of tax, resulting in a cash payment refund from the IRS.

“There was a need that was never met during the Trump administration as Congress was rightfully focused on the human impacts and costs of the Covid-19 pandemic,” Tolbert said. “But then Congress and the Trump administration failed to deliver on any support to the clean energy industry during that time. We see the IIJA as a really important step and set of investments to give the clean energy and advanced energy industry the support it needs to be able to lead the transition. We think there is tremendous opportunity for our industry to really be able to engage and be successful and grow.”

As the nationwide rollout of funding allocations begins, AEE has been working on linking members into these processes, informing states where industry and companies can help provide capital that they can match, as well as flagging various opportunities around competitive grants.

“We’re trying to make sure that states take optimal advantage of the money made available by the federal government,” Tolbert said. “We want to make sure that we connect the states, decision makers, and agencies directly with our member companies so that our member companies are well positioned to get these dollars out the door as quickly as possible.”

At the federal level, AEE has been commenting on key regulatory proceedings like transmission planning and investment and EV infrastructure.

“We’re making sure our industry voices are being heard at the federal level,” Tolbert said.

AEE has a packed agenda as it heads further into 2022. Tolbert says that U.S. Sen. Joe Manchin’s willingness to revive talks around the Democrats’ climate and social spending bill means that the trade group will be fully engaged in building momentum around the legislation.

“Our focus on the Hill is making sure that whatever package is negotiated, our member companies stand to benefit from it and that the package accelerates the transition to clean energy and doesn’t prolong independence on fossil fuels,” he said.

“That is a major priority for AEE,” Tolbert said. “There is an immense need for states to be proactively engaged in that planning process. One of the biggest challenges in the U.S. is the siting of renewable energy projects; right behind that is making sure we have the transmission to get those projects to the people who need the power. If we don’t do more to proactively engage the states and communities on those two issues, then we’re never going to realize the full market potential of the policies we’ve passed.”

On the administrative side, AEE continues to engage around a variety of issues related to the IIJA, with a focus on implementation of infrastructure dollars. The organization is prioritizing investments in membership technologies in several key areas, including significant EV infrastructure opportunities in California and funding for school bus electrification in New York.

“We are leaning into those market-driven policies as a way to talk about it, with a focus on empowering consumers and working with local governments to make the case that this is a means for local governments to fill budgets, to reap the economic rewards of allowing investments to go forward,” Tolbert said. “It’s also recognizing that progress isn’t necessarily going to be watershed but is going to be incremental in nature and being okay with that. We just need to make sure that the incremental wins build upon each other and that we demonstrate success.” 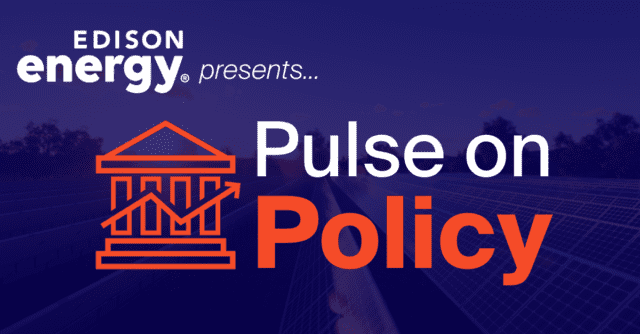 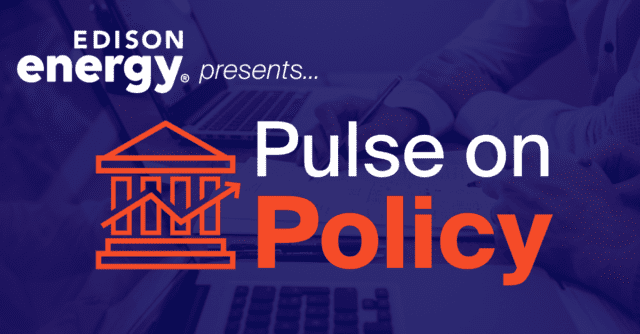 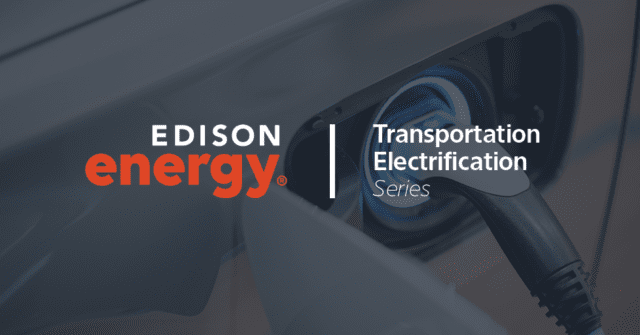