October is Energy Efficiency Month, and to celebrate that, we are shining a spotlight on our Engineering team. Throughout the month, we will be featuring some of the talented members on our team, learning how they first got started in the field and offering a ‘behind the scenes’ look at a day in the life of an energy engineer. 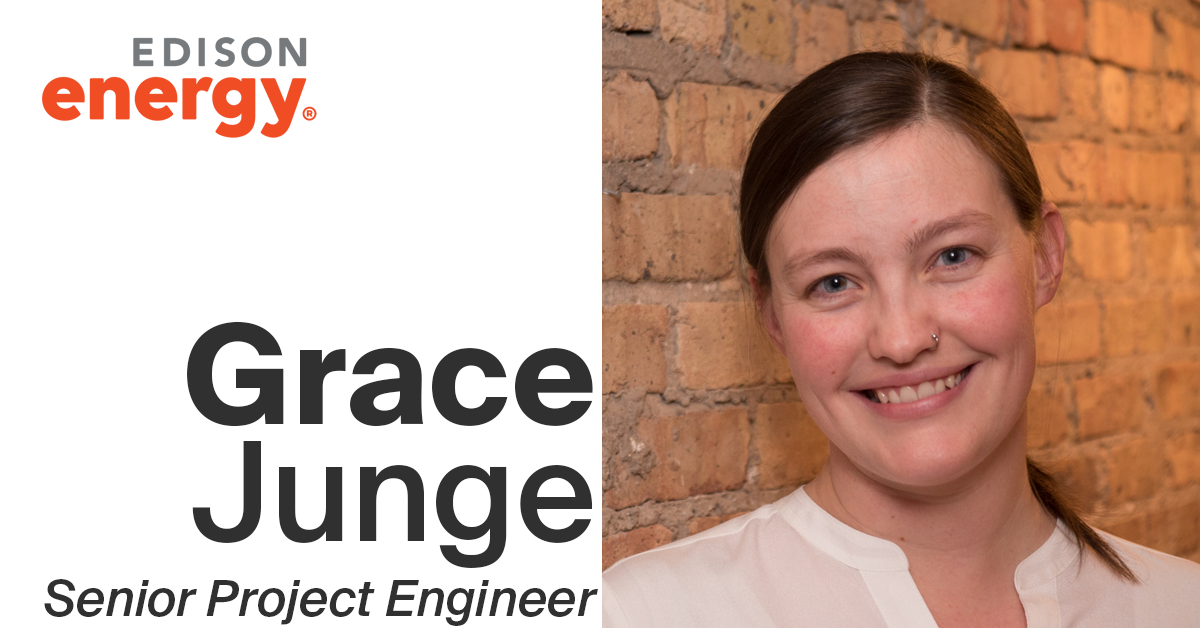 Today, we are featuring Grace Junge, a Senior Project Engineer on our Energy Optimization services team, based out of our Chicago office.

I went to college for engineering at the University of Illinois in Chicago. I graduated in 2012, at which point I started my first job out West. I lived in Los Angeles working for a company called EnerNOC, which has since been acquired by Enel X. About 5 years in, the team that I worked on was sold to a small company called Enpowered Solutions, also California-based. So I worked for them for about 2 years. During that time I moved back to the Chicago area, which is where my family is from.

While I was in Chicago, a colleague I had previously worked for reached back out to me and connected me with Scott Johnson (who leads our Midwest team) to talk about the role. And that’s how I ended up at Edison – and it’s been great so far.

Why did you decide to pursue a path in energy efficiency?

Growing up, I had never intended to go into engineering, but eventually I realized that I’ve always been very good at math and science. It’s my natural skillset – the more analytical thinking. I did a semester abroad in the beginning of my college career and a portion of that was spent in Costa Rica at a sustainable farm.

There was an engineer there who had designed an anaerobic digester system that recovered the methane gas from all of the bio-waste at the facility that was used for cooking and heating, along with a rainwater collection system, solar panels – the whole nine yards – to be completely off the grid. That’s probably where my first impetus of “oh, engineering can be about this?” came into play, and that’s how I started to get an interest in the field.

Having had that interest sparked, I also realized during the subsequent year that my personality was suited to problems that had very clear solutions – so more equipment and mathematically-based. All of that steered me into the engineering path. The energy efficiency aspect was an easy fit for my interest in environmentalism (and also being kind of nerdy).

Tell us a little about your role at Edison Energy. 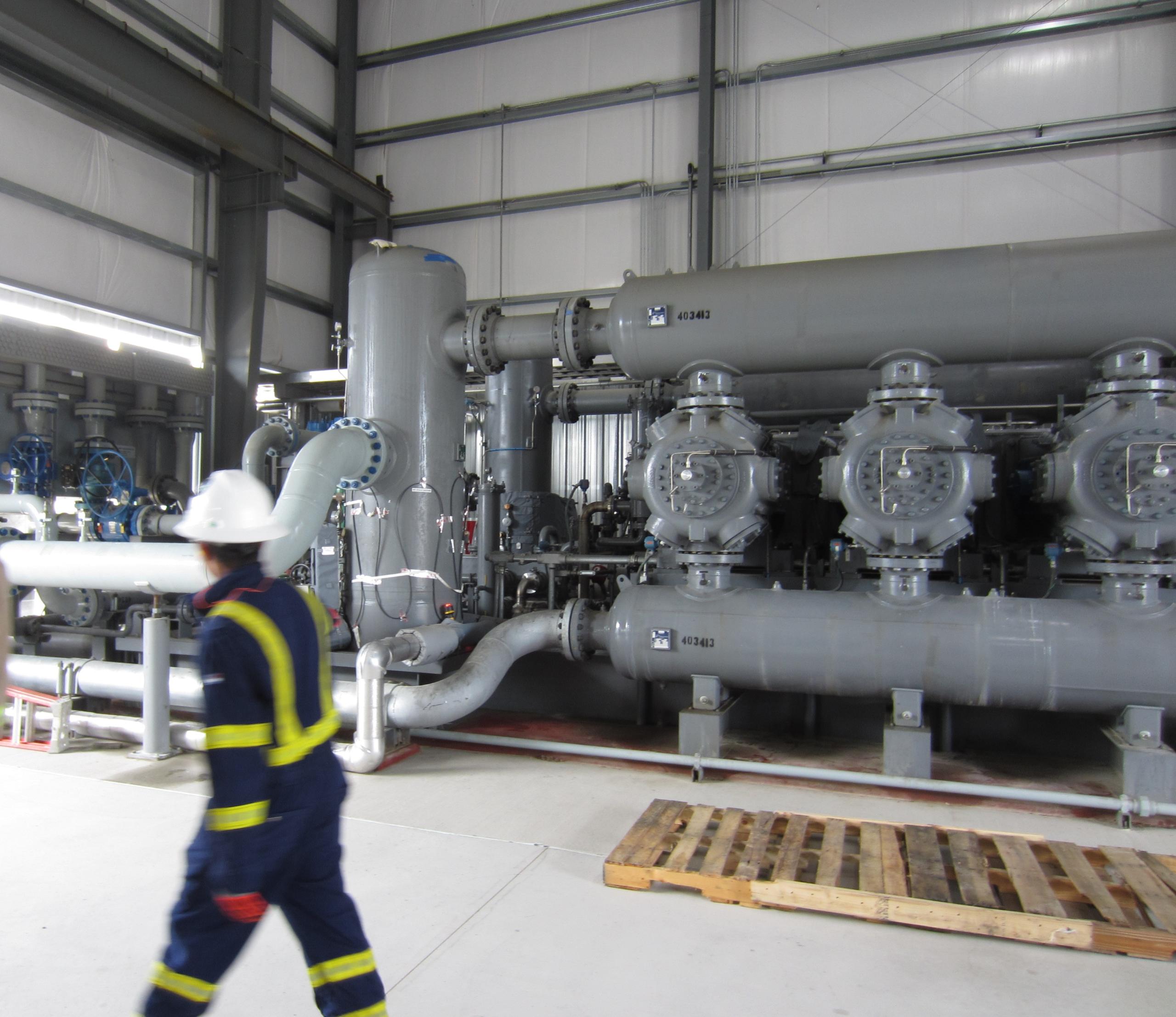 Working as a Project Engineer, we work heavily on projects like Energy Audits, Retro-Commissioning, and Commissioning. I work most frequently on Retro-Commissioning projects. Most of what that entails is spending some time with a client to understand where their goals are in terms of energy efficiency, sustainability, etc., and then getting on site and actually testing the equipment. Most of our RCx work focuses heavily on HVAC systems, which is the heating, cooling and ventilation in a building, which often consumes in the range of 30-40% of the building’s energy.

Focusing on their highest energy, we will test the equipment and see if it’s working properly, which includes opening and closing dampers, valves, turning on and off fans and pumps. We’ll also survey to see if they are using equipment that is inefficient, and then will come up with a list of things that will reduce the energy consumption of their facility. We put together all of the information we’ve gathered and come up with our recommendations, and then spend some time quantifying what those look like and providing detailed recommendations on how the customer can proceed. Often we hand over the report or findings to the customer and then we help them to actually implement the changes as well.

In addition to my primary role as an engineer, I also lead a number of our internal continuous improvement efforts, including coordinating professional development trainings, developing calculation tools and template files, and sitting on our diversity and inclusion taskforce.

Tell us one aspect of your role that others would be surprised to know about?

I would say more surprisingly, is the absolutely gorgeous views that I get doing my job a regular basis. Since a lot of equipment is on the rooftop, I’ve watched the sun rise over Los Angeles, I’ve watched the mountain peaks in California. It’s just stunning views sometimes in the oddest of places. That’s something that I always enjoy. I remember a project out in California where the site was in a valley just surrounded by snow-capped mountains, but in a relatively temperate climate.

Tell us about a project you feel most proud of; and what made this project unique/successful from your perspective?

One project that I just recently wrapped up and am feeling pretty great about was with a large hospital network in Wisconsin. We did a retro-commissioning project at a medical center. We did the initial investigation phase back in October of 2018, and for the past almost 2 years I’ve been working very closely with the site team to get all of the measures implemented. We had a list of 100+ items to do, so it was extensive to say the least. But when we tallied everything up at the end, the site had managed to do so much work with their internal staff (the facilities maintenance team and controls engineer) we got about everything done for about $1,500 in external costs for the whole project, which is pretty remarkable. They reaped almost $70,000 in annual savings so the payback was excellent.

What I really liked about working on that project was that it was an excellent collaborative effort. To me, one of the key successes was working with the site team. It’s great when we get to work closely with them, because the site team implements projects that are really effective for them: cost effective and functionally effective.

Also it was particularly impressive that we were working at this large medical center during COVID and still managed to get all of this done this year. That was a great success story.

What are some of the biggest challenge(s) you face in this role or industry? How do you overcome those challenges?

Probably the biggest ongoing challenge is budget restrictions. Our clients may not have a lot that they’ve allocated to spend on energy efficiency and they are also not financially set up to incentivize energy efficient operations. In many cases the people who do the day to day O&M work get a fixed budget, and if they use their O&M resources to save money through an energy efficiency project, they don’t get a bigger budget – it stays the same. Similarly, if it’s a larger network of facilities, if they save money on their energy spend, then they may just get a smaller energy budget for the next year. So that’s definitely a challenge, the structure of how money flows through an organization.

There’s a big political aspect to it, where there are organizations that have prioritized energy efficiency and placed money behind it, and they are ready to jump in and do it. But there are a lot of organizations that have stated some of their energy efficiency goals, but have not financed them. And working in that sphere of “well, how do we still achieve something without any money to implement?” can be a real challenge across the board.

I enjoy the challenge of overcoming that, like the project I previously mentioned, where we really have the room to get creative and dig in to ways we can implement without requiring a large budget. The flip side of that is it requires time. I was blessed with an exceptional team at the hospital site I was talked about earlier, but it’s not always the case that they have a really strong maintenance and controls team who can do the work in-house. Or they may have one but they are just so overwhelmed with all the other work that they don’t have the time of day to give to energy efficiency. So the twin constraints of time and money can really kill very fundamentally common-sense projects that would pay for themselves in a couple of years.

What advice would you give to a peer who is looking to pursue a career in engineering / energy efficiency?

Speaking to someone more entry-level, if you’re looking at going to college, or thinking of going into a career like this, I would advise folks not to be scared off by the math! It’s definitely not easy, and of course it’s important to have those fundamentals, but realize, if you have an interest in this kind of thing, or you enjoy the idea of really making an impact on energy efficiency and sustainability, that you’re not going to be stuck doing math for the rest of your life. There’s a lot of different roles within this field. Don’t be scared off! There’s a lot of different avenues that you can follow, a lot of interesting technologies, and it’s a constantly evolving field as well. You aren’t sitting still in your career from a technical perspective either.

My advice to girls looking to go into engineering – do it girl! It is intimidating to get into. There’s a lot of gender difference, often in the way we are raised, and the level of familiarity that women have with things like working on a car, or fixing things around the house, so it can be intimidating to go to college and see the auto club and the machining club and all of these things you’ve never done before, that you’ve never touched, that you don’t know the lingo for. I would just say to young women who maybe are intimidated by that, that there is so much more to this field than knowing how to use a CNC machine, or knowing how to change your oil. Those are skills that you learn if you are inclined, but those are not the critical skills that will dictate your success as an engineer. You don’t have to go in already knowing how to do everything. You will learn everything you need to know.

If you would like to learn more about Grace, or have a question about her engineering work with Edison Energy, connect with her on LinkedIn! 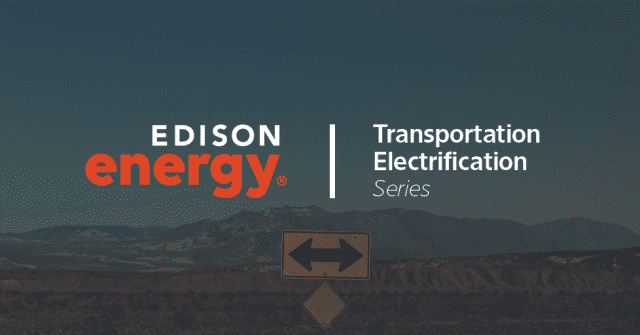 How to Accelerate Your Transportation Electrification Journey – Develop a Plan 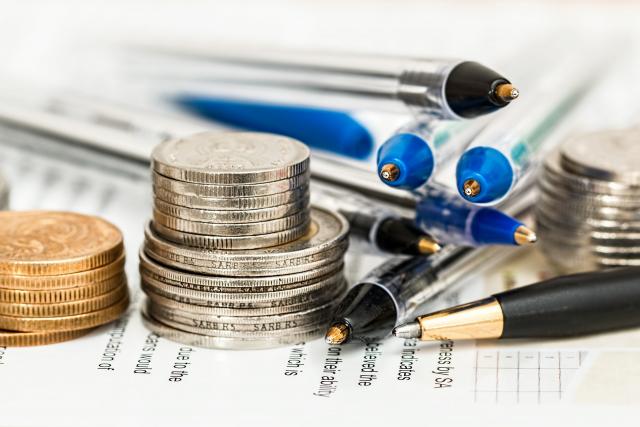 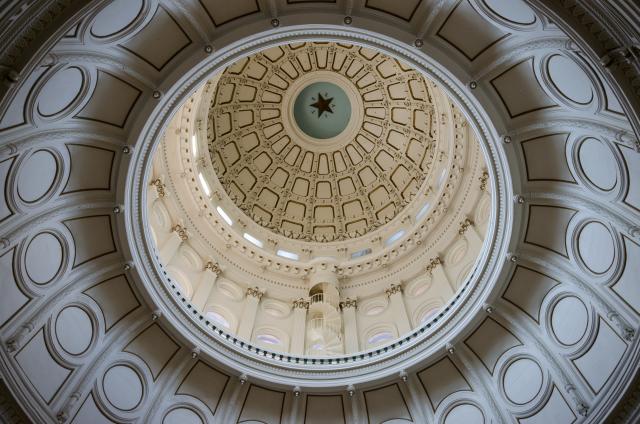