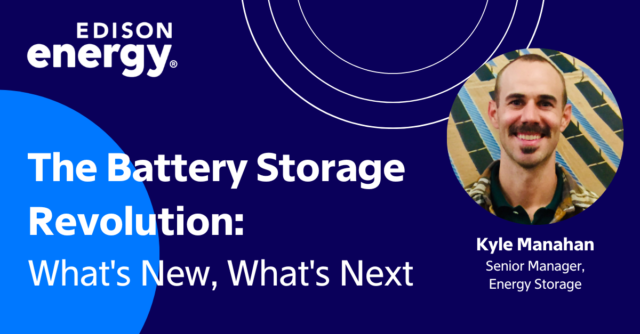 Price volatility. Supply chain constraints. Rising commodity prices. It’s been a turbulent time for the energy sector. Yet despite these challenges, battery storage adoption is growing at an unprecedented pace and scale.

The capacity of utility-scale battery storage more than tripled in the U.S. during 2021, from 1.4 GW at the end of 2020 to 4.6 GW. And according to a U.S. EIA survey, battery purchasers cite using more than one application for a system, with respondents increasingly using battery systems to store electricity when prices are low and discharge electricity when prices are high–a strategy known as price arbitrage.

There are plenty of benefits to that, especially if energy savings reflect an attractive ROI. Manahan calls battery storage a “no-brainer” for leveraging a host of purchasing mechanisms including capital expenditures, leases, and power purchase agreements.

“If that ROI is there, it’s a cash-smart way to build out your infrastructure from an energy perspective,” he said.

Manahan, who joined Edison earlier this year, is heading the firm’s energy storage team and building out its storage capabilities and offerings as client demand surges.

“Energy storage has evolved in ways that are very interesting and counterintuitive,” he said. “The concern around safety has exploded because of thermal runaway events in lithium ion-based batteries. I think safety has created space for alternative technologies such as fly wheel and hydrogen technologies. Mass adoption of energy storage goes hand-in-hand with the prevalence of batteries in consumer electronics and electric vehicles. The scale at which batteries are being produced is unprecedented, and the utility, commercial, and industrial energy storage world is able to piggyback off the production for EVs and consumer electronics.”

Mass production of batteries for energy storage and EVs is well underway, as manufacturers try to keep up with global demand. According to Wood Mackenzie, global lithium-ion battery capacity could rise more than five-fold to 5,500 GWh by 2030, although supply of batteries will remain tight this year.

“I think many people assume that the cost optimization in solar is happening in storage,” Manahan said, noting steep price drops for solar and other renewable technologies over the last decade. “Because of the pandemic, commodity price fluctuations, and the healthy demand for energy storage, that decrease in cost hasn’t happened.”

In fact, the cost has gone up significantly–nearly double since a year and half ago.

“I think that’s interesting,” Manahan said. “But with all the change that has happened, there is still mass adoption, there are big projects going into the ground, and there are successful energy storage projects that have come online in the last three to five years. These projects are proving that energy storage is a successful tool for the energy sector to leverage.”

Procurement is proving to be the biggest challenge right now for battery storage customers. According to Manahan, it often comes down to who you know.

“Let’s say you’re a customer that knows exactly what you want and you’re ready to write a check. It’s still not easy to finalize that project, which is wild,” he said. “And that’s because the demand for batteries is so big that you’ve got to be connected in the industry to get the quote. You’ve got to prove to the vendors that you’re ready to buy, and what has happened is that there is a community that is basically buying all the demand. Since they have all the resources and they have relationships with the vendors, they get preferential treatment. If you’re a new customer, it’s a little harder to break in because there is less risk to vendors to sell to repeat customers.”

Another hurdle is interconnection, with significant technical and regulatory barriers remaining around rapid integration onto the grid, according to BATRIES.

These barriers include a lack of inclusion of storage in interconnection rules, an inability to make system design changes to address grid impacts and avoid upgrades during the interconnection review process, and states that have not incorporated updated standards into their interconnection procedures and technical requirements.

“Utilities are wrapping their heads around what energy storage is,” Manahan said. “Interconnection is a vital part of any kind of renewables project and because energy storage is new, many utilities are looking to slow down the process to better understand its implications. Oftentimes, slowing that down means throwing the book, so to speak, at energy storage projects during interconnection applications, which may require infrastructure upgrades that are above and beyond what you would expect to see.”
This includes substation and utility line upgrades that would typically not be required for conventional projects, according to Manahan.

“As more storage projects make their way through interconnection, utilities will begin to better understand the benefits that energy storage has for their infrastructure needs,” he said. “We are seeing this happen in ERCOT, where battery systems have helped the grid handle extreme weather events in both winter and summer months.”

Despite procurement and interconnection challenges around battery storage, there is plenty to be optimistic about. Aggressive greenhouse gas emissions (GHG) targets are being set at the local, state, and federal levels while simultaneously, major legislation has been adopted to drive battery storage.

The Inflation Reduction Act has been the most significant nod to energy storage to date, with the inclusion of a standalone ITC for storage facilities with a capacity of at least 5 kWh if construction begins before Jan. 1, 2025.

“The UN has big goals, the Biden administration has big goals, and these are exciting because in order to reach those goals, renewables and energy storage are going to be a vital piece in reducing GHG emissions,” Manahan said. “As government bodies figure out the best path forward, there’s going to be a major piece that will be dedicated to energy storage and that’s going to cause incentives. There will be top-down pressure to install storage in a smart way and that is going to create a lot of interest. There will be many projects kickstarted because of these initiatives.”

“The technology itself is improving,” Manahan said. “It feels like every six months there’s a new set of products out on the market that need to be understood, and each time it gets safer and more efficient. That’s really exciting news for the sector.”

“The manufacturing world in general is having lots of ups and downs and that has had a huge effect on energy storage,” Manahan said. “But I think the takeaway here is getting a customer’s ducks in a row, really ironing out what works size-wise now, and helping them in the future. Even if they decide not to move forward, that’s information that they can hold onto and leverage. And as the industry recovers from the supply and commodity shocks, they’ll be ready to pounce on opportunities in the future. That’s something that we can do, regardless of the current craziness in the world.”

On September 19-22, Kyle will be attending RE+, produced by the Smart Electric Power Alliance (SEPA) and the Solar Energy Industries Association (SEIA). Click here to connect with Kyle at the conference. 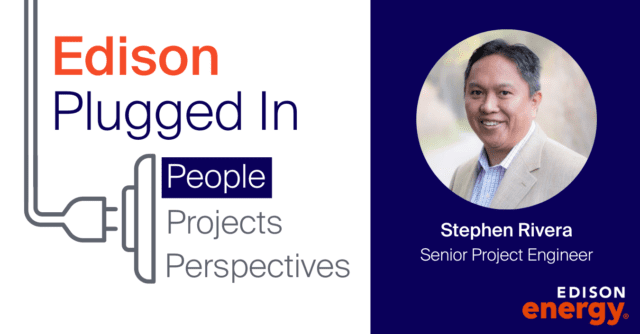