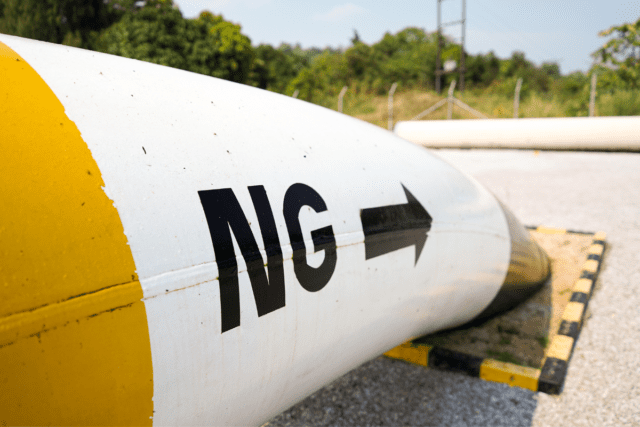 This post by Jeff Bolyard, Principal, Energy Supply Advisory, is featured in our January 2023 Monthly Monitor, which includes articles and analysis for the natural gas, electric, crude oil, and sustainability markets. To read the full newsletter, click here. To sign up for the Monthly Monitor distribution list, click here.

Everyone has heard about the ongoing energy woes across Europe, which were measurably exacerbated by Russia’s invasion of Ukraine. Prompt month prices for natural gas at TTF, the Dutch benchmark, were at $24.10/MMBtu on 2/21/2022 – a premium of 5.4 times the U.S. Henry Hub Benchmark of $4.43/MMBtu at the time. By late August, the TTF peaked at $99.19/MMBtu – over 10 times the Henry Hub price.

Since then, the European benchmark has declined significantly, along with the Henry Hub. Intraday on 12/29/2022, prompt month contract of TTF was trading at 5.8 times the Henry Hub price (TTF $26.21 and Henry Hub @ $4.48), both in the vicinity of where they were 10 months prior.

What caused the price in Europe to spike to all-time highs? It was the fear that demand would exceed the availability of supply. Fundamentals are the tangible market drivers that could severely impact the price of energy such as the amount of production/ supply available, level of storage inventories, increase in demand that coincides with the arrival of winter, and the amount of infrastructure capable of effectively moving gas supplies to areas of demand.

This past year, all these fundamental drivers were called into question regarding the availability and reliability of natural gas in Europe this winter – and into the foreseeable future after Russia invaded Ukraine.

While benchmarks are a standardized gauge of pricing for a region or country, the price can vary – sometimes significantly. This can happen when regional fundamental conditions arise that would change the supply/demand equilibrium, causing the price of natural gas in one or more regions to diverge from the benchmark price – indicating an imbalance of supply and demand. The larger the real or perceived imbalance, the greater the price differential from the standardized benchmark.

In the U.S., this regional price differential is called Basis, or the Basis Differential.

In September 2021, I wrote a blog entitled What in the Basis Is Going On?, which described more about what Basis is and what trends we saw occurring in the U.S. natural gas market.

One of the Basis regions that had an increased risk of price spikes was the SoCal Gas region of California. Fast forward 15 months, and demand for power continues to grow with widespread electrification. Add to that another year of extreme drought out west that reduced the ability to use renewable hydro; supply chain snags coupled with a Department of Commerce investigation that slowed the progress of adding more solar in 2022; an August rupture of El Paso Pipeline Line 2000, which is a major feeder to the West Coast; and a general lack of any other dispatchable fuel, all of which added to the concern that the winter of 2022-2023 might be difficult for the West Coast.

In December, Winter Storm Elliott hit the entire West Coast, sending temperatures dropping and demand soaring. So, while the Henry Hub benchmark for January 2023 had a final settlement of $4.709, the regional Basis premium to that area was significantly higher. Four of the major Basis locations on the West Coast (PG&E City gate, So Cal Gas City gate, Malin, and Sumas) were averaging a premium of $40.02/MMBtu for January 2023 delivery (as of 12/28/22).

The chart below shows the month-by-month forward Basis differential for selected Indices for the West Coast region for calendar year 2023. This extremely high Basis along the U.S. coast has several similarities with the fundamental factors that drove the price up in Europe earlier this year. Both rely on imports of energy to meet ongoing demand, each has limited pipeline infrastructure capable of quickly delivering more natural gas, and both have had a major supply source of energy disrupted.

In Europe, Russian pipeline supplies were severely restricted and on the West Coast, drought and supply chain disruptions prevented renewable sources from contributing as much as they could. At the time of the price spike, both had natural gas storage levels that were below historical norms. 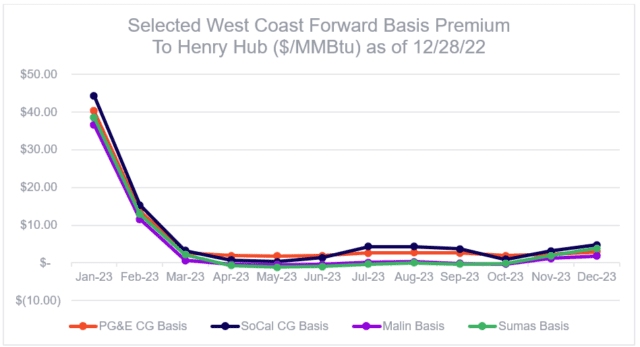 The Basis premium to Henry Hub for the four West Coast price points in the chart average $40.03/MMBtu for the month of January but drops to an average of $5.66/MMBtu for the calendar year. Even with the much lower 12-month average, it still exceeds the Henry Hub benchmark to which it would be added.

Comparatively, the same price periods for three of the Appalachian Indices (Dominion South, Columbia Gas App, and Transco Leidy) Basis points average NEGATIVE $0.90 /MMBtu (that’s a discount to the Henry Hub) for January 2023, and average NEGATIVE $0.947/MMBtu for the entire Calendar year of 2023.

So, what is the reason for the huge price discrepancy within the U.S. between the West and Appalachia for January of $40.93/MMBtu? It’s the same basic supply and demand factors that are impacting energy prices in Europe: the market believes that there is not enough supply to meet the demand out west, or at least that a significant risk exists. This mirrors the overarching belief in Europe. And while the causes in the U.S. may differ from those in Europe, the outcome has been the same: a higher price trend.

Meanwhile, in Appalachia and west Texas, just the opposite is occurring. There is more supply within the region than can be consumed, and there is no existing infrastructure to reach other markets. The result of this plays out in a significantly discounted Basis Differential to the Henry Hub benchmark.

The West Coast is not the only region in the U.S. to have extreme Basis swings. New England has been in the winter spike pattern for decades, while the South Atlantic Coast is becoming the next area of high price concern, with January basis in New England in the $8-$15/MMBtu premium and the coastal states of Virginia, North Carolina, and South Carolina in the $9/MMBtu area.

For Europe and the domestic U.S. regions where Basis price risk exists, there is no quick fix. Renewable penetration will take more time, new gas pipelines take years to complete – if they can get built at all – and coal continues to be retired. It is critical to understand your natural gas cost components, the areas that have ongoing risk, and monitor appropriate Basis and NYMEX pricing for opportunities.

The January 2023 West Coast 52-week low Basis price, currently averaging $40.03, could have been purchased back in late 2021 or early 2022 at a price of ~$1.08/MMBtu. This high to low price differential for an industrial using 2,000 MMBtu/day with a site in California, Oregon, or Washington equates to spending $2.41 Million more or less in January, depending on when Basis was bought. The average residential that uses 1 MMBtu/day in January would spend ~$1,200 more next month for their natural gas based on timing of Basis purchase and whether the bottom price was captured or not.

Either way, the bottom line is that Basis Differential, or the location of where natural gas is consumed, matters – sometimes even more than the NYMEX benchmark price.